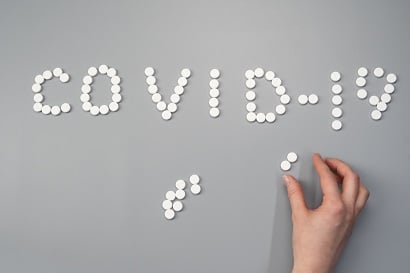 How pharma supply chains are faring during the global pandemic

A close look at the data reveals that it is not supply chain breakdown that has led to drug shortages, but increased demand, says Intersys Risk Director Catherine Geyman

It’s too early for pharmaceutical supply chains to declare victory against the threat of Covid-19. If nothing else, the world remains wary of a second wave and further lockdowns. The industry can, however, make a good case that for now it’s avoided defeat. Despite some initial fears at the outset of the crisis, most pharma supply chains have kept producing.

Operations and procurement teams across the pharma industry have worked hard to ensure that their supply chains have held up well over the crisis. Mostly it’s paid off. In fact, that’s generally true for businesses across industries – particularly given the scale of the crisis. As a recent piece in The Economist put it, “In the face of Covid-19 [the] sinews of business have, for the most part, held up remarkably well… Systemic risks such as those which brought the banking industry crashing down during the financial crisis have, as yet, failed to materialise.”

That is not to say that we haven’t seen problems. As we’ve detailed before, drug shortages are now a persistent feature in the market. In January, even before the scale of the crisis became clear (though its prevalence was growing in China), the US Food and Drugs Administration posted new shortages for 19 companies (covering 11 drugs). Nor does it mean we didn’t see a significant increase in this number as the crisis took hold. February saw the first problems triggered by active pharmaceutical ingredients (API) supplies impacted by Covid-19. By April the number of new shortages reported had rocketed to 71. 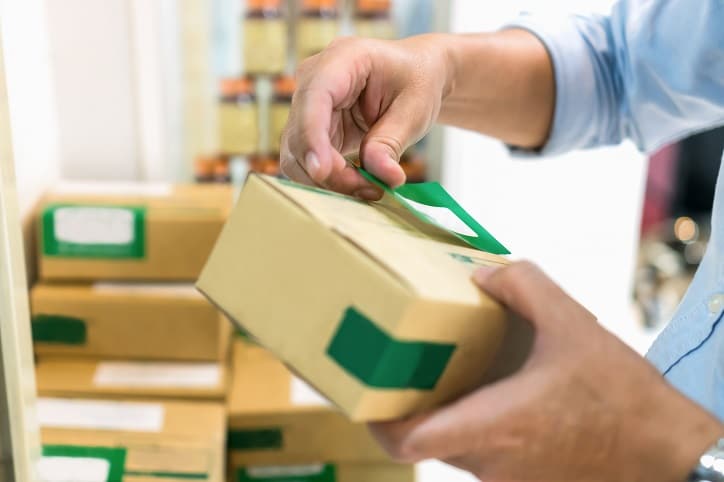 Drug shortages had been a persistent feature in the market before the arrival of Covid-19.

At the start of the year, new FDA Drug Shortage reports were, in fact, all discontinuations – simply notifications of manufacturers taking commercial decisions to cease production of a drug. They were not shortages in the common sense at all. That is not unusual, and February through to May saw between 10 and 16 discontinuations added each month.

Moreover, according to the reasons reported by the manufacturers, the increase of shortages in April wasn’t the result of delays or API shortages caused by Covid-19. It was almost entirely due to a surge in demand. The number of new drugs shortages from companies as a result of demand increases rose from none in January and February, to six in March and 40 by April. In May, there were 15 reported.

Of course, that’s not to argue that the pandemic didn’t result in drug shortages. The surge in demand was driven by the virus: the analysis shows the highest demand was for anaesthetics, with new shortages for drugs such as Propofol and Midazolam – both used to treat Covid-19 patients requiring mechanical ventilation. Requirements for some sedatives and anaesthetics was up by half. Even before this, in March demand-driven shortages had begun to increase for anti-infectives. This coincided with speculation that antivirals such as chloroquine phosphate might protect against the virus. 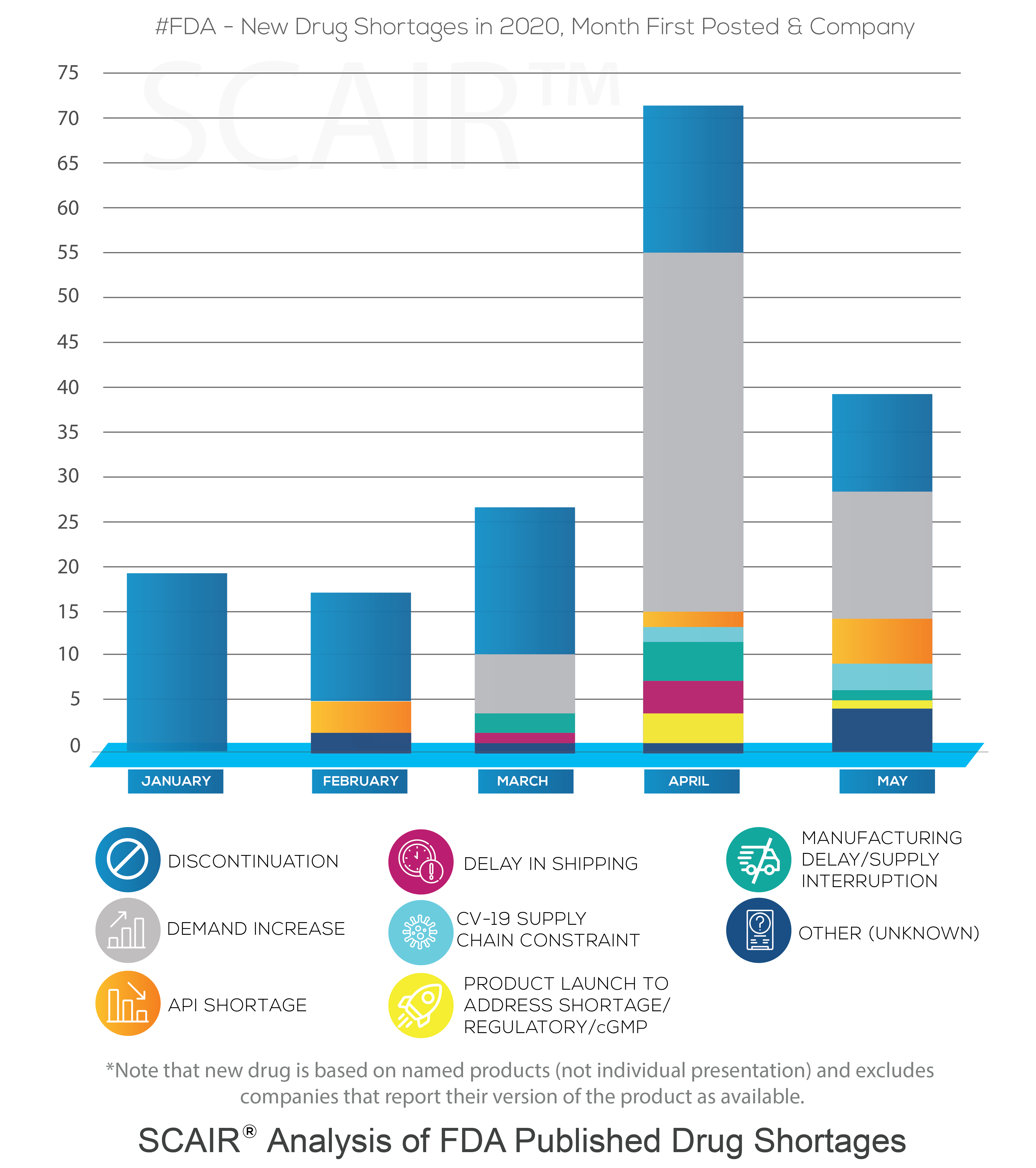 There were some shortages as a result of supply chain issues in the first quarter, but the reasons given by manufacturers do not directly blame Covid-19. The FDA announced in February that it had seen the first shortages caused by the outbreak (although it refused to name the drug). Still, the supply of Pindolol due to API shortages was categorically not related to China. More supply problems saw new shortages in March, caused by supply chain issues: Teva’s Amoxapine tablets (due to manufacturing capacity constraints); Nizatidine capsules (supply interruption following other manufacturers discontinuations); and Alkaloida Chemical’s Hydroxychloroquine Sulfate Tablets (shipping delay). None can be linked explicitly to Covid-19, though, despite reports that reopening Chinese factories were operating at only 50-80% capacity.

In fact, according to the SCAIR® analysis, it’s not until April that a drug  shortage can be definitively attributed to the pandemic’s impact on supply chains: Teva’s Propofol, which suffered delays to shipping. At that point, some two dozen or more countries were on lockdown. The majority of shortages – 40 out of 71 – were still down to demand increases, however. And most of the rest of the drugs in question were discontinued.

In what would seem the biggest test of pharmaceutical supply chains for years, the industry can be reasonably pleased, or at least relieved, with its performance.

Or perhaps only partly.

It’s true that things could have been much worse and that the paralysis of supply chains some feared as a result of the pandemic did not materialise. Even adding another in April and three more in May, the number of new shortages reported to be as a result of Coronavirus supply chain issues since January is just five.

We should note several facts, though. First, the FDA data lists new shortages. Many of these persist, so any shortages are often degree cumulative. Second, concerns over API shortages from China and, more particularly, India are real. The dependency on these two countries for APIs remains a real concern. The number of problems due to APIs, even if not explicitly linked to Covid-19, more than doubled in May to five. Overall, there have been ten since January.

Finally, even if supply chains have not collapsed in the face of the pandemic, it would be hard to argue they’ve proved entirely up to the task. The dozens of shortages we’ve seen as a result of demand increases are something that will require a hard look.

When the ReMediES project consortium looked at the causes of all ongoing drug shortages in 2018, the reasons for shortage reported by the manufacturer was not taken at face value. More in depth research into the health of the reporting company’s supply chains was undertaken. Previously published non conformities (recalls, certificate suspensions, inspection results) were analysed and an adverse FDA inspection was established as the most frequently occurring pre-cursor.  The study revealed that an FDA inspection OAI preceded 69% of drug shortages  – and almost three quarters if we exclude product discontinuations. Demand was a factor, but not the main issue.

(For a greater insight into the causes of supply chain interruptions, based on 2018 data, visit the SCAIR® ReMediES page where you can download the ReMediES white paper.)

The pandemic has changed that. Onsite inspections by the FDA are suspended, and regulators in the US are doing all they can to keep supply chains moving to satisfy essential demand. What we’ve seen is that regulation, or at least its application, is flexible in a time of crisis. Supply chains, perhaps less so.

The issue is not merely that production was unable to keep up. We must probably accept there will always be limits to what can be achieved in the face of an unexpected and massive surge in demand. But the lack of transparency of those supply chains, both internally and externally, makes it that much harder – and that much more likely that shortages will result. As analysts noted at the time back in March, the lack of clarity about companies’ supply chains made predicting the impact of Covid-19 on drug availability more difficult. And that has consequences for planning for and mitigating any shortages.

Ultimately, the supply side of the biopharma industry has generally proved resilient to Covid-19; it is unprecedented demand that has created the most disruption. Considering the current circumstances, the outcome is an endorsement for the work of supply chain managers who invest in designing and maintaining robust supply chains.