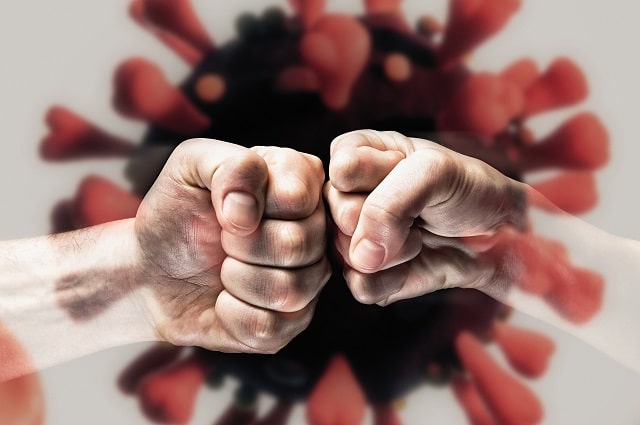 With potentially thousands of lives at stake, vaccine supply has become a highly charged issue. In truth, however, pointing the finger is not going to fix the real challenges facing supply chains. Intersys Risk Director Catherine Geyman takes a close look at the current conflict between first-to-market vaccine manufacturers and the EU, and what we can learn from this difficult episode for governments and pharmaceutical businesses.

With threats on export bans and the reignition of Brexit debates, the contractual dispute with AstraZeneca has taken a decidedly political turn. In that context, a bit of pharma bashing is the easy option. After all, some may say, it is AstraZeneca that’s failed to deliver. But there’s just a couple of problems with that…

First, even its supporters would concede that the EU is not entirely without fault. More bluntly, as Matthew Geyman argues, the EU ordered too late, paid too little and has delayed too long even to approve the vaccine. (It only did so on January 29.) And it’s not just AstraZeneca saying this. Some of the German press agree.

Don’t forget that AstraZeneca is not making a profit; it is supplying the vaccine at cost. If the EU then chooses to spend months beating down the price and AstraZeneca has set up separate supply chains to serve local markets, it follows the EU will not be served by an over-abundance of manufacturing capacity and that EU capacity will simply not have had enough time to optimise its processes (which, as we note below, are complex).

According to the rapidly withdrawn tweet by Belgian minister Eva De Bleeker, the EU is paying €1.78 per dose compared to the UK’s $3-4 per dose. Both are far cheaper – by orders of magnitude –than any of the other vaccines.

Perhaps more importantly, though, pharma bashing ignores just how incredibly complex and expensive it is to produce vaccines and ramp up capacity. Sometimes, as AstraZeneca has explained, it simply can’t be done. It’s not a case of just trying harder.

As a headline writer puts – Even Presidential Pressure Might Not Get More Vaccine to Market Faster. One expert in the piece, Lawrence Gostin, a professor of global health law at Georgetown University, explains, “The big problem is that even if you can get the raw material and get the infrastructure set up, how do you get a company that is already producing at maximum capacity to go beyond that maximum capacity?” 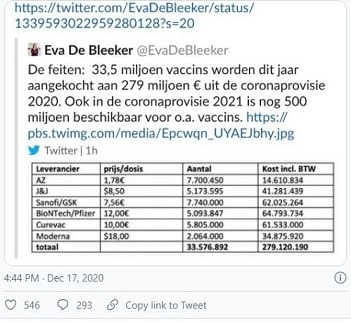 Belgian minister Eva De Bleeker revealed in a tweet, later deleted, that the EU is paying €1.78 per dose compared to the UK’s $3-4 per dose. Both are far cheaper than any of the other vaccines.

Nothing new under the sun

Scaling up from clinical trial-sized batches to full scale production is difficult for any novel medicine, but vaccine processes are particularly complex and challenging. Unlike the more predictable chemical synthesis of traditional drugs, biologics processes for vaccine production usually involve the reproduction of living cells. Sometimes these processes don’t behave predictably and the amount of useful cells produced (aka yield) can be disappointing. AstraZeneca’s delivery commitment to the EU back in August is not very different from a farmer pledging a supply after planting a crop in the spring: he may hope for the right weather conditions, but he can’t know for sure the exact size of any harvest in the autumn.

The lower-than-expected yields AstraZeneca has experienced are hardly unique, and the EU is not the only customer to have been affected. Supply chain issues have been a concern for Pfizer since December, and the UK contended with its own AstraZeneca shortages last year.

And it’s not just an issue amid the massive demand prompted by the global pandemic. We saw these sorts of shortages with swine flu over a decade ago and more recently in the run-up to the winter 2019-20 regular flu season, before Coronavirus hit.

But if this should encourage some cooler thinking in the EU, we should also acknowledge that its response is not entirely unprecedented. Vaccine nationalism is nothing new; part of the 2009 swine flu shortage occurred because an Australian company decided to satisfy its own country’s needs first. Nor are export bans new: it’s worth noting that the UK itself put restrictions on exports for some covid drugs (for treatment rather than vaccination) early last year – and this wasn’t the first time.

In the heat of a race to save the lives of thousands of their populations, it’s not surprising tempers run high. Rather than who to blame, though, we should look at what can we learn. 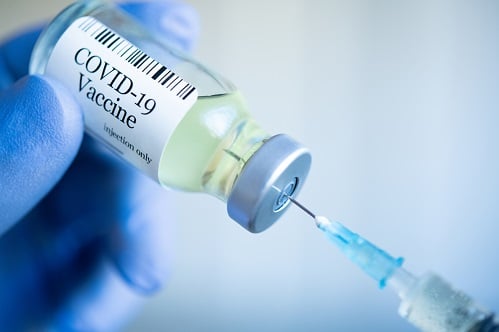 Vaccine production can result in unpredictable – and sometimes disappointing – yields.

Political risks back for supply chains

Not all of those lessons will be encouraging.

The first and most obvious one is that political risk remains a major factor in pharma businesses’ supply chains and those that rely on them. Of course, this isn’t new either – even if concerns around US-China trade disputes seem a long time ago now. The Belgian medical regulator’s raid on AstraZeneca’s vaccine production factory near Brussels at the behest of the European Commission certainly brings the point home, however.

It’s easy to say we should keep politics out of vaccinations, but that is probably unrealistic. In some cases it may even prove unhelpful. The politicisation of the vaccine roll-out isn’t just about potential export bans; we’ve also seen how political will and urgent need can smooth the path to market. Israel is leading the world in its vaccine drive and reportedly has the interventions of its prime minister and health minister to thank: their conversations with Pfizer’s chief executive led to the country promising to rapidly roll-out its vaccine drive and share the data with the company on its impact in return for plentiful supplies. Today, more than half the country has had at least a first dose of the vaccine, against 12% in the UK and three per cent in Germany.

Whether for good or ill, recent weeks have shown that businesses cannot ignore the role of politics in times of crisis.

Other issues are likely to come out of the recent debates. One is a renewed focus on contract terms. Certainly terms such as “best efforts” are coming under a new level of scrutiny, and we may end up seeing some legal clarity on what commitments such phrases actually compel of each party. Who knows how impartial any decision on that will be if the AstraZeneca contract is ultimately contested in the European Courts.

Another long-term impact we’ve already seen as a result of the pandemic, though, is also likely to be reinforced by the recent battles: the move to onshore production.

Britain started 2020 with little vaccine manufacturing capability. The last year has seen massive investment in developing its domestic capabilities in England, Scotland and Wales. These include:

The UK is still dependent on overseas covid-19 vaccines, not least for the Pfizer supplies from Belgium that the EU is threatening to block. However, that dependence is far lower than even a year ago, and will likely decrease in future. It’s no accident that the new Novavax vaccine is to be manufactured in Stockton-on-Tees.

The pandemic has seen a massive increase in onshoring, and that’s likely to stay. In light of the recent disputes and the uncomfortable ongoing dependency on India and China for API Production, few countries now will risk not having substantial domestic capacity. The UK’s efforts signal a good start but the level of investment pales into insignificance next to the financial onshore incentives already injected into the US economy.

Finally, the recent spat has once again raised issues for pharma from Brexit. Unlike in previous instances, however, we now have greater clarity about the impacts of leaving the EU in practice. There is, it’s fair to say, something for everyone.

On the one hand, the faster UK roll-out was, at least in part, made possible by the UK’s exit from the EU. Early approvals by the UK’s Medicines and Healthcare Products Regulatory Agency contributed significantly to the speed of the UK’s programme. The European Medicines Agency has been much slower. Had the UK still been in the EU, it could theoretically have opted out, but since no EU member has, that seems unlikely. The UK would also almost certainly have relied on the Commission’s procurement programme – subject to so much current criticism.

It is hard to escape the conclusion that the UK’s improved vaccine roll-out represents an unexpected Brexit dividend.

On the other hand, the threats of export bans from the Commission underline quite how different the UK’s relationship with the EU now is, and the new risks that has introduced.