The thing about the hurricane season is it’s always easy to speak too soo.

We noted a couple of weeks ago that Puerto Rico, a key production centre for pharma manufacturers, had escaped the worst of hurricane Irma.

Yet the clean up wasn’t even finished when the island was hit by the worst storm in 80 years, Maria, bringing “total devastation”. A number of factors have left the island particularly hard hit: Already fragile infrastructure leaving most without electricity – for weeks and many possibly for months; even cell phone coverage is limited; and widespread flooding has been exacerbated by the failure of the Guajataca Dam. The island also already filed for bankruptcy earlier this year, leaving it poorly prepared to tackle the costs of getting back on its feet.

Hurricane Maria might also have proved that it was a bit early to congratulate the industry and governments for avoiding drug shortages following Irma and Harvey. On Monday, the FDA warned that shortages could occur if the Puerto Rico pharma industry wasn’t helped to get up and running quickly.

“The island is home to a substantial base of manufacturing for critical medical products that supply the entire world. This industrial base is an important source of jobs and economic vitality for the island. It is a key to Puerto Rico’s economic recovery. The manufacturing facilities are also a pivotal source of critical medical products for the entire United States,” its statement read.

The problem, as ever, is both the scale of the storm – a “catastrophic event unlike many the United States has faced”, as the FDA put it – but also the scale of pharma manufacturing in Puerto Rico. That’s shown in a map taken from the tool in our SCAIRTM software of FDA Registered Drug Establishments affected: 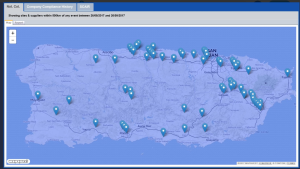 With such a concentration in an area so prone to tragedy, the challenge for the industry to maintain supplies will alway be substantial.

It pays to have supply chain backup plans, providing you know what to back up.
SCAIR® helps you improve supply chain risk decision making. The outputs from SCAIR® enable you to quantify the impact of critical supply point failure on your bottom line, helping formulation of appropriate continuity plans and increased levels of preparedness should the unthinkable happen.

Having a weak link in your supply chain isn’t a problem. If you know where it lies.
SCAIR® makes supply chain exposures – and their remedies – obvious. Failure to fully understand the vulnerabilities in your supply chain could result in damaging business interruption. This can be avoided by holding strategic inventory or evaluating alternatives. SCAIR® enables a cost benefit analysis of the value of investing in contingency plans against the value at risk.

‘Acts of God’ don’t cut it with the board
SCAIR® helps you keep your supply chains running. In an increasingly dynamic, global business environment, maintaining continuity of supply is the key. Understanding the value at risk at each point in your supply chain will enable you to focus on your critical vulnerabilities. SCAIR® guides you through a detailed analysis of your exposures and calculates the impact of single supply point failures across your product portfolio.